If your iPhone is broken, the first store you can talk to is a mobile shop (softbank, au, docomo, etc.) where you purchased an Apple Store or iPhone. Now that there are private iPhone repair shops all over the country, it is possible to have them look even if there is no AppleStore nearby.

IPhone failure also includes screen cracking, battery failure, base failure, submersible failure, etc.
I think you'll be worried about what happens to the data in any of the repairs.
If you ask if the data remains when you make a repair request, it is a story until then, but I would like to explain in as much detail as possible.

What happens to the data when changing the lcd?

It will never go away.
The most common trouble with iPhone failure is liquid crystal cracking, but glass cracking, it is a lot of failure contents that I have seen once, including myself and acquaintances.
If you break the liquid crystal, you may not be able to see it at all, or you may be able to operate it somehow even though the screen is cracked.
However, it is better to confirm it once because I think that it may erase the data depending on the repair shop.

What happens to the data when replacing the battery?

It will never go away.
The battery will also be a lot of trouble after the liquid crystal cracking, but if the expansion and the battery is bad, let's replace it.
If you want to do a battery replacement at a private repair shop, I think that it is the most time-consuming repair among iPhone repairs because it is about 10 to 20 minutes.

What happens to the data when doing base repairs?

Be careful.
If infrastructure repair is required, it will be severe, but iPhone data is embedded in the base.
In the case of smartphones such as Android, it is easy to evade data because you can insert an SD card, but in the case of iPhone, it is mostly to take up the backup of the data in iCloud and iTunes, If you do not have a backup, it is better to assume that the worst data will be lost.
However, it might be able to be managed if you consult a professional agent of iPhone even in the base repair.
Of course, the Apple Store and mobile carrier shops don't repair the foundation, so we have no choice but to consult a private contractor.

What happens to the data if I do submerged repairs?

Be careful.
The contents vary greatly depending on the degree of failure even if it is said that it is submerged, but the data remains as it is because it becomes a liquid crystal exchange as a repair if it is a problem only of the liquid crystal.
If the most common "power does not turn on" in the case of submersible failure, it is better to check the contents well to the store to be repaired because it is likely to enter the repair of the base.

Do you ever have data removed from the repair shop?

Wouldn't!I want to say.
If you are worried about extracting data, we recommend that you send it to repair with passcode lock, but if you can not touch, if the screen does not appear, it is better to consult a major shop that you can trust.
Passcode seems to be easy to unlock, but it is impossible, and this story was put out in the investigation by the FBI of the United States before, but it was useless after all. 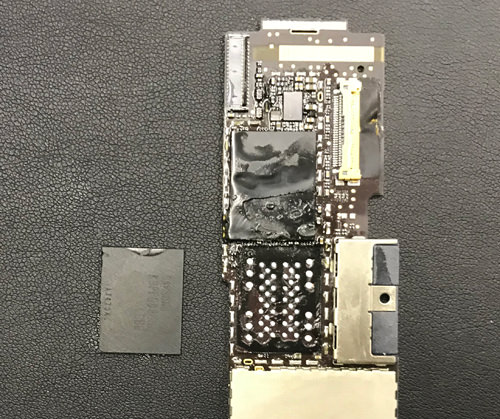 In the image, the above is the foundation of the iPad, not the iPhone.
I wish I could have prepared the base of the iPhone, but I couldn't make it.But the structure is basically the same.

I think that you can see that the square chip is off the base, but the data of the iPhone and iPad is in this part called NAND.
At first glance, it seems to be easy to come off, but it is a fairly difficult task, and it cannot be removed without special tools such as heat guns and soldering.

It is said in general,
When you repair it in the Apple Store or a mobile shop, data erasure is the basic.
It is a translation that the repair shop of the private sector is active for most people who want to repair in the state where the data is left,
Nearly 100% of private repair shops will not intentionally erase the data.
However, I think that there is a "Terms of Use" when accepting, but it is better to be careful because it is almost always "not guaranteed with respect to data".
I think that it is rarely broken on the repair shop side, but it is not able to recover the data.
Therefore, it is necessary to back up the data that is good in order to protect important data.

Warning: Declaration of PLL_Walker_List::walk($elements, $args = Array) should be compatible with Walker::walk($elements, $max_depth, ...$args) in /home/bunkai/bunkai.biz/public_html/wp/wp-content/plugins/polylang/include/walker-list.php on line 62