Have you ever been using a mobile phone and suddenly getting a bad signal?
In this article, Softbank iPhone, smartphone, in those who use a mobile phone, I think that it will be helpful for those who suddenly become bad radio waves.

[The terminal you are using and the current state]

I am using iPhone XR and iPhone8 with Softbank SIM card, but I think that it is a relatively new one as a model.
In addition, although it is the state of the radio wave of the iPhone, I feel that it is not bad as long as you check the radio wave sibecause it is a place such as four or three.
Then, it is said that the improvement of the radio wave can be expected depending on the situation because there is a thing called the home antenna 3 when I examined variously on the Internet.
We have you contact educant us and send it to you.

When I say how slow the speed is, it is as slow as the smartphone that the speed limit was applied.

From yahoo’s top page to the next purge, it takes 20 seconds at the earliest, 1 minute if it is slow, and if you do not see the screen.
When I use a personal computer at home, I have to tether my iPhone, but I felt that it was a matter of life and death because of the state where I could not use the personal computer at all from these things.
We are also considering transferring to other companies, but we expect that the installation of the home antenna 3 will be effective because procedures etc. are troublesome.

[What is the electricity bill for one month of home antenna 3? ]】

As long as you check on the homepage, even if you leave the power of the home antenna 3 on for one month, it is around 105 yen, so I do not think that there is no need to worry about the electricity bill so much.

Home Antenna 3 has arrived in about a few days after applying.
Please note that 34,000 yen penalty will be incurred if you transfer or lose it without permission.

I thought that it would cost money because it becomes a rental item, but it was all free from the postage.

[Was it effective to install the home antenna 3? ]】 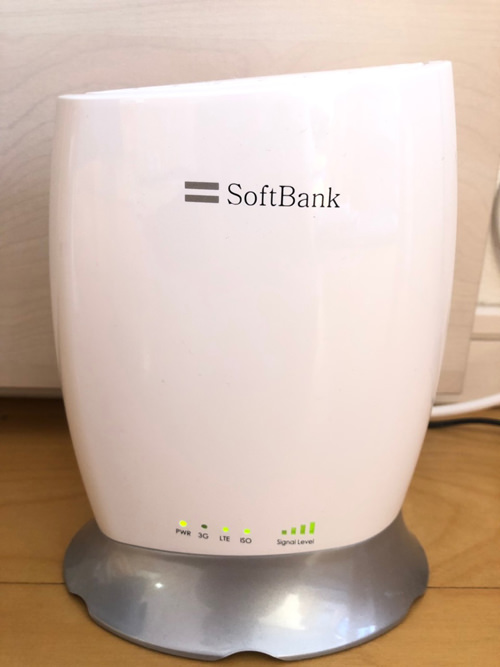 As a result, there is no effect at all!The radio wavedidd.

The information on the Internet had an effect!The radio waves have been improved!Because there was such a thing, It became a very disappointing result because I had a lot of expectation son of the effect.

But it’s too early to give up!

Next, I would like to introduce everything from field surveys to the installation of SoftBank donor antennas.