I think that there are many people who are worried about the deterioration of the battery when thinking about the iPad 2 year, but it is possible to replace the battery (battery) cheaply by performing the following process.
The battery is built-in and cannot be easily replaced, but if you have confidence in your arm, please try it!

If you replace the battery of the iPad 2 with Apple, the repair fee is 10800 yen (tax not included).
Unlike LCD replacement, I think it is relatively reasonable, so if you are afraid to repair it yourself, we recommend that you consult the Apple Store and repair shop.

Will the data disappear if I change the battery?

The data will not disappear just by replacing the battery.
Since the data of the iPhone is recorded in the part called NAND on the logic board, the data is not lost just by replacing the battery.
However, the data is not lost only if you repair it yourself or repair it at a non-regular store.
If you want to replace the battery with data, you should avoid manufacturer repairs because it will almost 100% of the data initialization when you ask Apple or an authorized service provider.
In addition, if you can take a backup in iTunes, etc., there is no problem with the manufacturer repair, but you can not take the backup, if you feel troublesome please consult a non-regular store.
The advantage of non-regular stores is that most of the repairs that are not related to the data will proceed with the data as it is.
If you can replace the battery by yourself with reference to the decomposition method below, you can use the iPhone as it is with the data up to now.
However, it is safe to back up and remember how to back up in case of a failure that you do not know when it will happen.

battery replacement, logic board replacement and disassembly procedure for iPad2 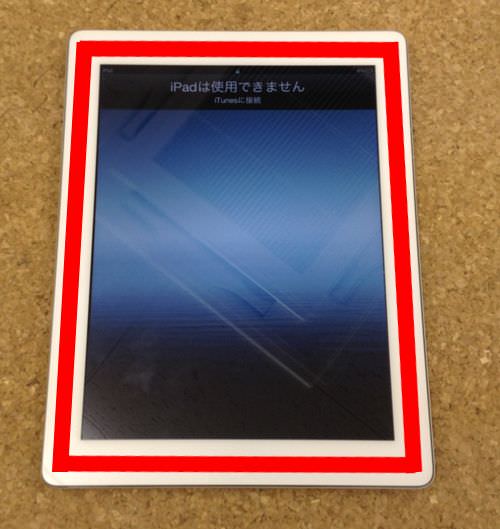 This decomposition method is also useful for expanding, degrading, and removing the motherboard if the iPad cannot be charged or the battery is bad.
The procedure for replacing the lcd glass of the iPad 2, replacing the LCD panel and disassembling it is the same, but you can check it in the image, so please disassemble it according to the procedure.

In addition, if you are disassembling the iPad for the first time, I think that it will take about two hours, so let's proceed carefully.
If you break the liquid crystal by any chance during the repair, it may become a rather expensive repair fee. 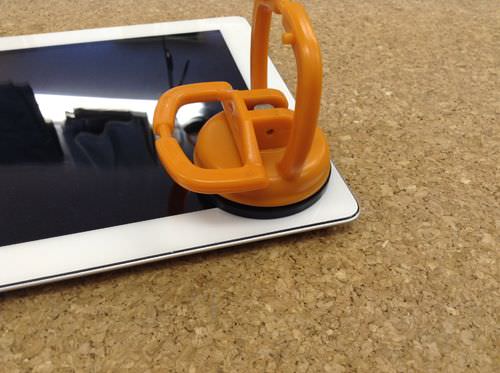 Next, we start to work on disassembling liquid crystal glass using suction cups and other methods.
Suction cups are sold at home centers and are mainly used by glass shops.
There are things from large to small, but small ones are enough to disassemble the iPad.
I think that the explanation of how to use is not particularly necessary, but the position is done while the knob is knocked down, and the knob is raised when the position is decided.
If it can be installed correctly, you can lift the iPad with only a suction cup, but if you lift it without heat, the touch panel will crack. Be sure to heat it with a heat gun and then lift it slowly.
LCDスクリーンオープニングプライヤー ダブル吸盤方式オープニングツール/フロントパネル開封ツール アイフォン修理工具iPhone 5/5C/5S/6/6plus/iPad適用 (サイズ2) 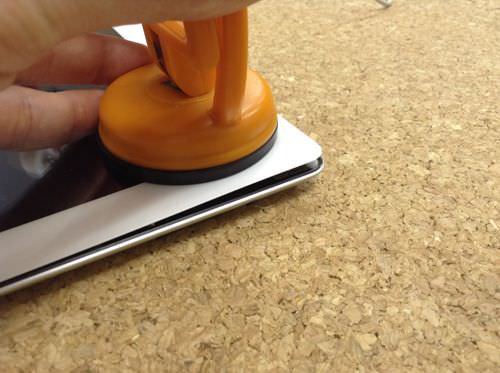 Decomposition of this liquid crystal glass is the most important for disassembling the iPad 2, so let's work carefully.
Do you see that the glass is farther than the main body?
It is a place that I want to remove at once as it is, but I will decompose carefully using a dryer, heat gun, etc.
If the heat is not hit so much, the glass will not peel off at all, so if the glass does not float at all, apply heat again and repeat the same work.
It may seem like a very laborious task, but the most time-consuming iPad repair is to remove glass or liquid crystal.
If you don't take the time to do it slowly, you accidentally put a crack!I've broken the screen!It is necessary to be careful because it might become a thing. 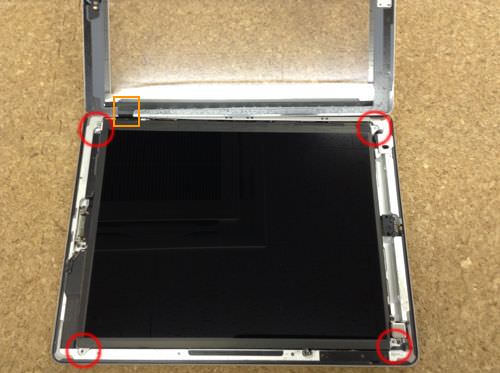 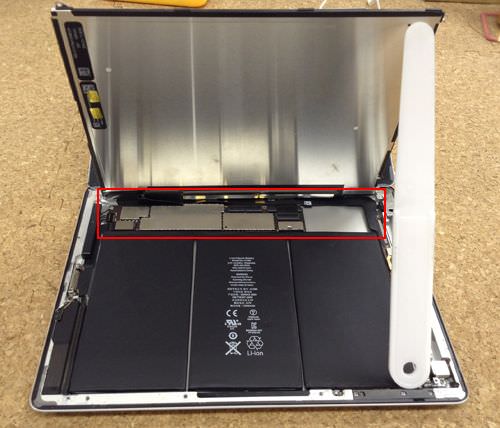 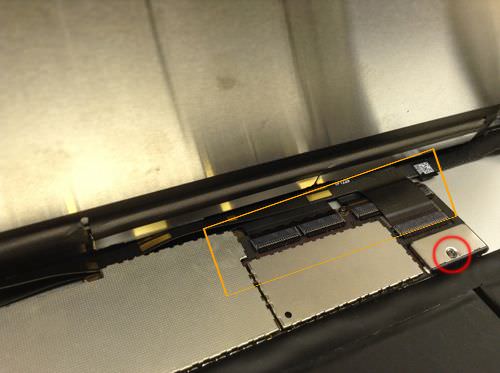 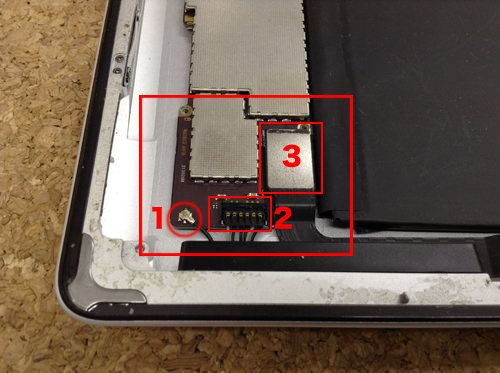 After removing all STEP6, remove the opposite part of the image.
If you remove three places in total, the connector relationship connected to the logic board will be removed all. 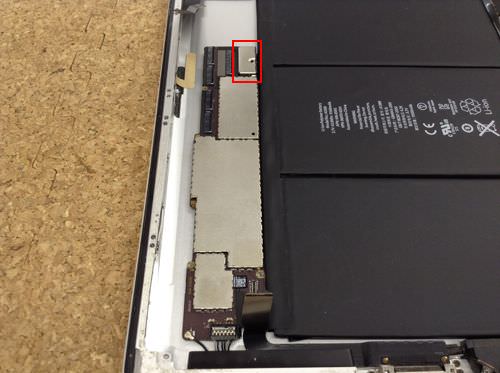 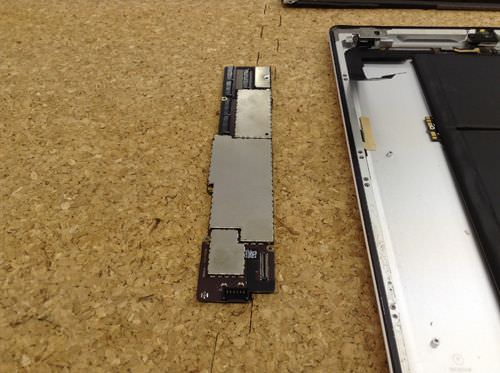 The logic board is taken out of the iPad body, but it becomes a very delicate part, so please be careful when storing it.

[battery replacement step 10 of the iPad 2] 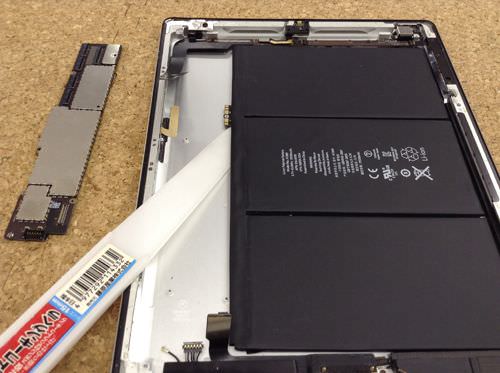 Put thin objects such as spatulas and rulers in the gap under the battery and remove them.
Since the battery is attached to the main body with a strong double-sided tape, it is easy to remove it when you work after warming it with a heat gun, a dryer, etc.
However, please do not apply wind directly to the battery when using a heat gun, dryer, etc.
It is ideal to hit lightly from the back of the body.
It may not be recognized even if you remove the battery and install a new battery, but it may also be due to the logic board and battery part not grounding well.
In that case, please try because it may improve if you apply a contact reviving agent to the tip of the battery a little.
KURE(呉工業) コンタクトスプレー(300ml) 接点復活剤 1047 HTRC2.1
イノウエ ソフトコーキングヘラ 10ミリ 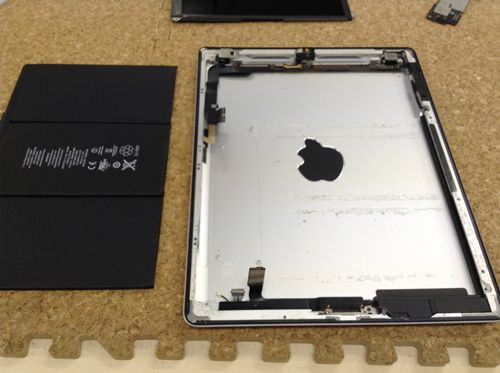 The battery on the iPad 2 has run out.
Usually, battery replacement is a method when the battery becomes unwell.
It is only work to replace the battery, but the battery of the iPad can not be easily replaced like a personal computer because it is buried in the inside of the main body.
Almost, we will disassemble to the state of the whole barasi, so please see the decomposition method, please consult the repair shop if it seems impossible.
In addition, there is a risk that the battery will expand if left in the car or in a hot place for a long time, be careful because the battery that has expanded also needs to be replaced.