iQOS holder failure!How to disassemble and repair yourself

I feel that the new iQOS 3, iQOS 3 MULTI was released on November 15, 2018, and iQOS is becoming more popular.
It was released two models at the same time in that it depends on how to use, but personally it is iQOS 3 MULTI.
I thought that there was a weight more than before purchase because the holder and the pocket charger were united, but it became very easy to carry because of the weight of about half even if it became one.
There are many parts that have changed when compared to the previous iQOS, but the charging part is also closer to Apple, such as becomes USB-C?I feel without permission.
(All new iPads, Macbook Pro, etc. have been switched to USB-C.))

It seems that it will be extended from six months to one year if even a simple product registration is done what happened to the warranty.
In addition, this guarantee is the impression that it became considerably thick because it seems to be covered by the failure due to self-damage such as the fall and submersion of iQOS.
If you are interested in buying iQOS 3 MULTI immediately and disassembling it, you can check it below.

No matter how much you charge, it does not change from the red display, or you have fallen into a situation where the red light is flashing violently, I think there are surprisingly many people?
There is a suspicion of the breakdown because it is unlikely to blink red even if it usually turns red.
If the iQOS flashes red, the possibility of failure is very high, so consulting the iQOS shop is the quickest way to isolate the failure, and if the warranty is applied, it will replace it with a new thing as soon as the warranty is applied.
I had flashed red about three months after iQOS purchase, but iQOS support responded immediately.

[Consult with a regular store for iQOS]]
The blade break is often the failure of the iQOS holder, but there is a thing that support can not be received if you disassemble (repair) by yourself, It is recommended that you consult once if it breaks down before trying to repair or disassemble yourself.
If you register the product immediately after purchasing, there is a guarantee for one year!

I tried to disassemble the holder side of Philip Morris' e-cigarette iQOS! 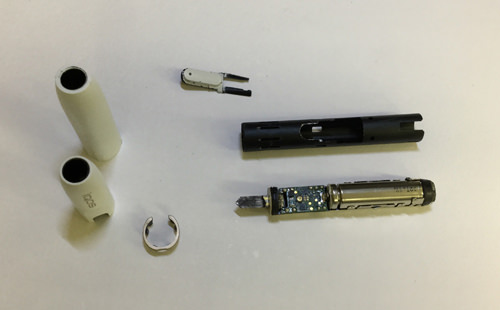 First of all, since the decomposition of the iQOS holder is likely to become a force technique, we do not recommend that you disassemble it unnecessarily!
Before exposing this decomposition method, we have published the decomposition method of the pocket charger first, but rather pocket charger is much easier.
If you can see the decomposition method of this time to the end, but there were various things such as the red lamp flashed because it broke down in the middle of the process!
In the end, it is possible to repair and use the holder again, but I do not think that it will decompose unless it breaks down in the future.
In addition, since the process that a lot of heating blades have broken in the breakdown is also put, the target person please try to refer to including the structure!
Because i can not take responsibility even if I have broken down by looking at this article, please be prepared to buy the iQOS kit again if it is disassembled.
In creating this article, I went with the intention of breaking the holder, so please do not worry about the holder is rattled! 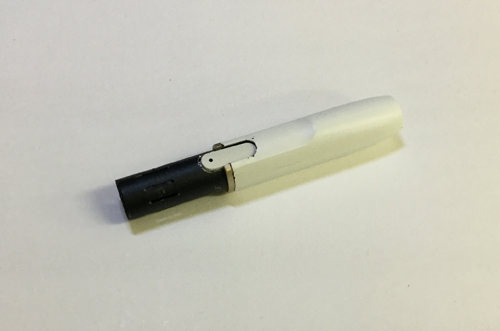 First of all, the cap part of the iQOS holder is removed by force.
Then the gold seam between the cap part and the bottom part?Parts??There is, but I will remove this part.
It is difficult just to remove this part, but please note that if you put too much force, it will lead to failure of other parts.
It is possible to remove it if it lifts it little by little because it is fixed with a plastic claw though the tool such as the spatula is inserted into the gap of the power button and it removes it. 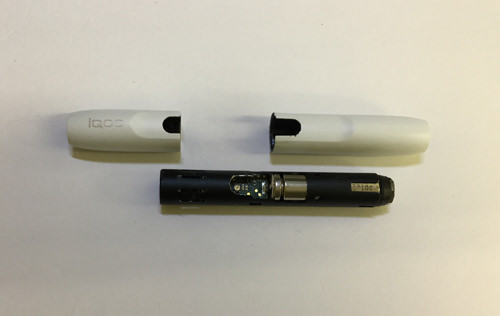 The process seems to be flying suddenly, but I had a hard time getting it into this state.
When I was able to remove the gold parts I had just removed, I felt that I could see the end of decomposition, but it was not easy.
It is not possible to remove it even if the black part is gripped and pulled out.
I don't think there is a power button in the image, but I removed it to make it easier to understand the decomposition.
Please check next how you were able to remove it like this. 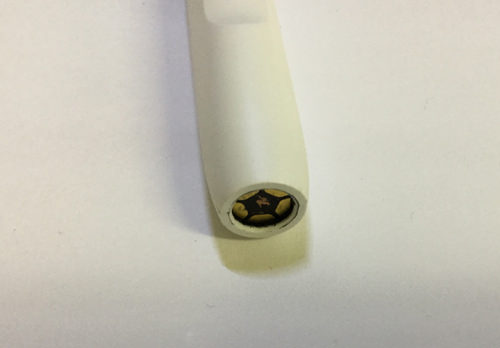 I knew that the holder root part is a very important place to charge with a pocket charger, but I decided to disassemble it by deciding that there is only here anymore!
I thought that five gold parts would probably be charged in contact with the pocket charger, so I hit the middle part with a hammer so as not to touch it.
Then, it was possible to do like the image of the previous. 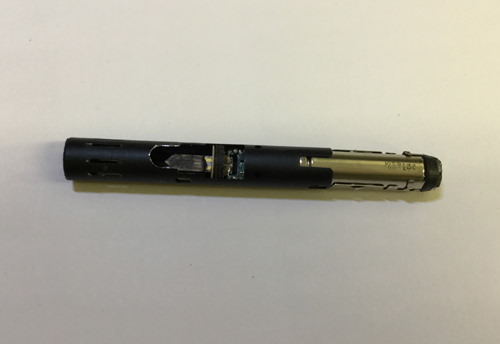 Compared to the time of STEP3, you can see that the inside is shifted to the right side, but it is pushed out in the opposite direction from the previous process.
I was wondering where to hit the tool and push it out, but I decided to push it out with my finger because the battery was not coming off and it could be shorted if I used it. 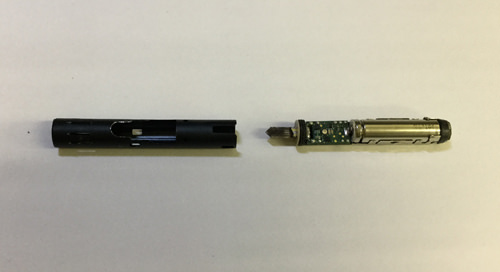 I was able to remove only the inside from the frame of black iron. 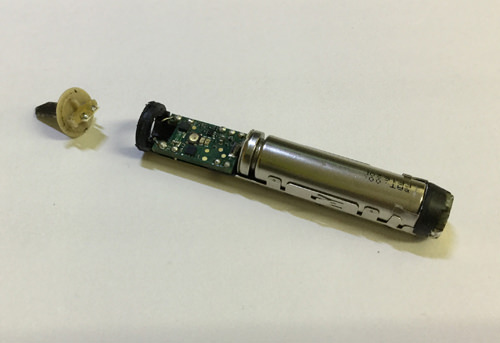 If you look at the image, you can see that the heating blade has come off.
The heating blade came off because I tried to remove it from various angles when I carried out the process up to the above.(Did you break it?)
However, I was able to re-open it by becoming this state, so let's break it down!That's why I thought.
Of course, the red lamp flashed at high speed when The holder was turned on in this state. 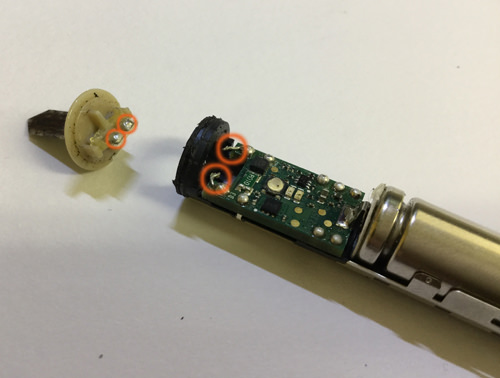 The heating blade of the holder has broken!I often hear that, but it has become a very simple making in the feeling that I examined, the tip is only soldered to the part that is surrounded by a circle. 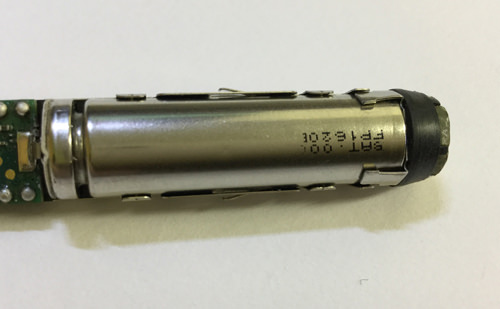 It is a battery used in the holder, but it has become a structure that can not be easily removed because it is fixed with a nail. 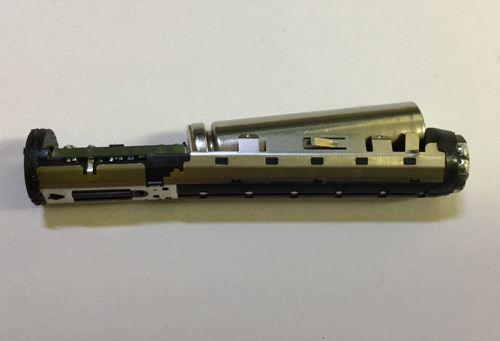 When the nail part was lifted with a tool, it was possible to lift the back side of the battery.
I couldn't tell what the battery was, but I think it's impossible to buy it normally because it was a battery that I had never seen before. 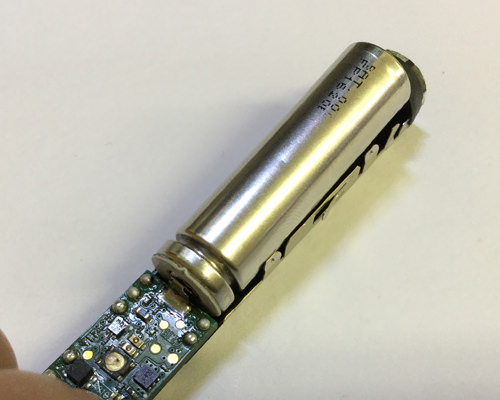 The positive part referred to in the battery is fixed with solder to the base, so it has become impossible to remove easily.
It becomes more as a decomposition of the holder, but now I decided to try soldering in the bad source because I started to worry about the failure of the heating blade. 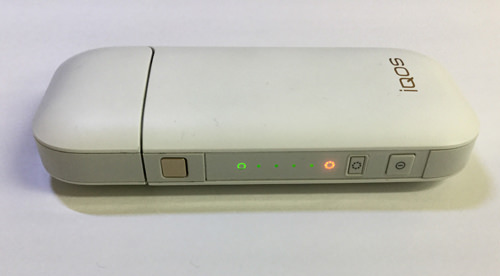 Do you understand?
We succeeded in repairing the heating blade!
In addition, I thought that it would have failed in addition to the heating blade, but I was able to charge it with a pocket charger without any problems at all.
If iQOS breaks down because there is no parts sale, please consult Philip Morris before disassembling!
The disassembly of the holder seemed easy and I struggled very much, but I was able to somehow return it to the state that can be used as before.
I thought to disassemble, but I want to change the battery in one or eight!I want to repair the heating blade!It is better not to disassemble if it is other than.