The LCD of the Apple iPad Mini 3 has broken down, so I was asked to repair the iPad!

the iPad Mini series is currently available up to Mini 4 and the parts used respectively are different,
Did you know that the LCD panel (inside) of the iPad Mini 2 and iPad Mini 3 use the same parts?
The iPad Mini 2 was launched as a Retina model, but the Mini3 is also a Retina model for the same LCD.
Of course, the specs are different, but the other major part is touch ID.
If you damage this touch ID (home button) during repair, fingerprint authentication will not work at all, so it is the place to be most careful when disassembling.

The following image is a state in which iPad is sent by courier and the power button is pressed, but there is a line on the screen, and some of it has become a state that can not be seen.
It does not change from this screen even if it waits as it is, but it is a failure of the liquid crystal panel as far as the symptom is seen.
As for the touch panel, only the lcd panel on the inside is replaced as a method of repair because there are no glass cracks or cracks. 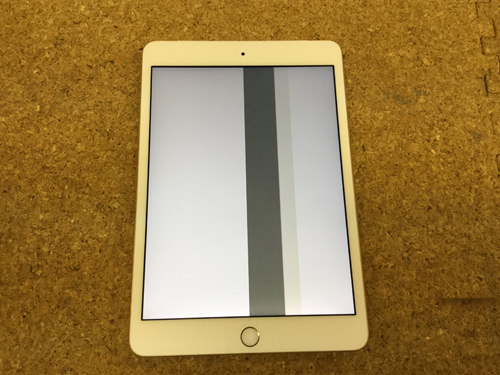 You only replaced the LCD panel of the iIPad Mini 3, but you can see that there is no line on the screen and it looks normal.
Since we do not touch the data, it is possible to use the iPad as before without setting up after return. 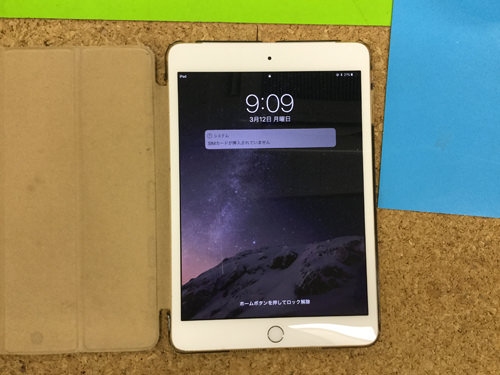 Why do I get a line on my iPad Mini 3 screen?

The most common cause is the fall of the iPad.
If the line seems to enter the screen after falling, it seems to improve by replacing the LCD panel almost, but if the line remains on the screen even if you replace the parts by any chance, logic board failure is thick rather than the fault of the liquid crystal.
The logic board of the iPad is safer to replace it depending on the budget because the parts themselves are expensive.

How long will it take to repair the iPad Mini 3 screen if it comes in?

As I mentioned earlier, it is also a common part with the iPad Mini 2, so there are many things that are in stock of parts.
The repair time will be about one hour if you proceed without any problems, so if you can bring it in, it will not be possible to return it by repair on the day.
Please feel free to contact us if you do not have time because it will be completed in as little as one day if there is stock of parts even if it is a repair method using a courier service.

How much does the iPad Mini 3 cost for the LCD replacement?

We are dealing with 10,000 yen including parts price and labor.

Since there is also a very abundant repair results, please feel free to contact us when it fails.